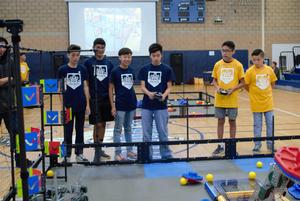 Buena Park Junior High School students learned poise and how to succeed while working under nerve-wracking conditions during a recent Robot Nation tournament.

Buena Park Junior High eight-grader Savannah Johnson, while making last-minute mechanical adjustments to her bot, said competing in robotics tournaments is nerve-wracking yet satisfying because it allows her to showcase her engineering skills against other students.

Johnson was one of eight Buena Park Junior High students to compete at the recent Robot Nation tournament, an annual contest that pits junior high schools against each other to see whose robot can best complete obstacle courses and objectives.

“Building the robot with your own two hands and being able to challenge what others designed is so much fun,” Johnson said. “It can be difficult sometimes and frustrating when you don’t get it, but it’s satisfying when you figure it out and it’s nice to have the experience.”

During the tournament, robots clashed as students demonstrated maneuvering skills, tested their robots’ ability to manipulate objects into a ring and applied science, technology, engineering and mathematics (STEM) principles to make on-the-fly adjustments.

The gym was filled with parents, families, educators and coaches who cheered as student-directed robots launched plastic, yellow balls at color-coded posts and took on other lively obstacles.

“We want to build STEM opportunities that prepare students for college and careers,” Buena Park Junior High Principal Erik Bagger said. “At Buena Park Junior High School, our goal is to increase the number of students who pursue STEM fields. We do this by increasing student interest and engagement through competitions like this.”

052119_BUENAPARK_ROBOT: Buena Park Junior High School robotics students control their bots during a ball-tossing event during the Robot Nation tournament on May 4.