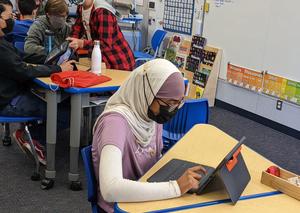 Gordon H. Beatty Middle School students made a splash at the Orange County Academic Pentathlon, winning nearly 50 awards during a multi-subject competition and Super Quiz that challenged this year’s contestants on the topic of water.

The team of 14 seventh- and eighth-graders competed against 40 other schools in Orange County to take home 48 medals at the competition, with eighth-graders taking home first place in their division overall and seventh-graders earning fifth place.

“Pentathlon allowed me to learn about water and make friends doing so,” seventh-grader Jonathan L. said. “I learned that the simplest things can expand into vast worlds of knowledge.”

The Pentathlon concluded on March 19 with a “Super Quiz” relay at University High School in Irvine, where parents and staff cheered students on as they answered questions in rapid succession. Beatty Middle School seventh-graders took home the fifth-place trophy, while eighth-graders placed first.

Beatty Middle School’s team worked vigorously during the 2021-22 school year, meeting after school to study topics such as marine biology, scientific attributes of water and even art created with water.

“The Academic Pentathlon is a great opportunity for our students to work together,” Superintendent Dr. Ramon Miramontes said. “By participating in this competition, our students have gained a wealth of knowledge that will lead to their success in college and beyond.”