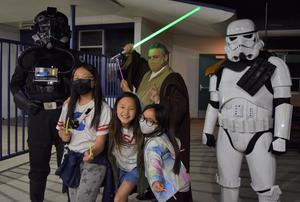 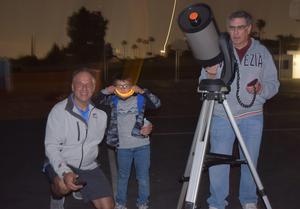 Emery Elementary School students gazed in wonder at constellations, the moon and the highly visible Venus during Astronomy Night, which also included games, music and a visit from popular “Star Wars” characters.

The event had an arts and crafts section where guests could make constellations from marshmallows and pasta, an information table, and three telescopes set up and run by volunteers from Orange County Astronomers.

Principal Debbie Clark said she jumped at the chance to host Astronomy Night for the first time in two years. She invited a Jedi, stormtrooper and TIE fighter pilot from the “Star Wars” films as a way to get students excited to learn about science and galaxies both near and far, far away.

“The whole event was really fun,” Emery School fifth-grader Tiffany K. said. “I got to see Mars using a telescope. I love science.”

Chris B. said he brought his daughter, Emery School first-grader Cerys, because he knew she would love the games and being able to learn about different planets and stars.

“It is so important to get these young kids interested in science early – it’s a neat event and it helps them learn about astronomy,” Chris B. said.

Cerys said she loved astronomy night and that her new favorite constellation is Pisces the fish. She also said she would love to be an astronaut when she grows up.

“Astronomy Night at Emery School is one of Buena Park School District’s favorite events, because it blends learning and fun and that means these students will remember this day forever,” Superintendent Dr. Ramon Miramontes said. “This event was a perfect way to get students excited about science and astronomy.”

ASTRONOMY1: Several Emery Elementary School students meet with and strike daring poses with popular "Star Wars" characters during their school’s Astronomy Night, which was held to get students excited about science, astronomy and STEM careers.

ASTRONOMY2: An Emery Elementary School student and his father wait for their turn to look at constellations and planets through a telescope, which was set up and run by a volunteer from Orange County Astronomers during the school’s Astronomy Night.